Devolve has many international developers on board to help build this global blockchain.

Devolve Developer will reshape the real estate industry with the emergence of a new business model leveraging a decentralized technology that creates access, increases efficiencies and reduces costs. Empowering individuals around the world with a trusted and transparent technology, Devolve Developer will discard many of the conventional hindrances and create a fully interconnected global economy that is completely peer-to-peer contributing to improved worldwide capital flow. 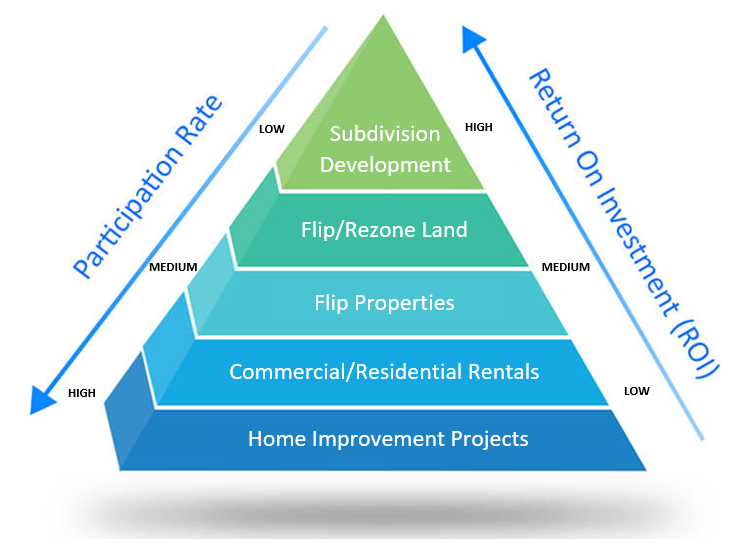 Real estate investors enter the market as a speculator, end user or long term investor who use the most common investment strategies of buy & hold, renting/leasing and flipping property. These strategies are highly saturated due to their ease of entry and respectable profitability margins.

Property development offers all the common benefits of investing in real estate such as stability, leverage, inflation resistant and increased equity, with the addition of producing high yields at an exponential rate.

Be a developer -
participate in the $217
trillion dollar industry

In the multi-trillion dollar real estate industry, substantial profits are generated with the operation of property development strategies. From land rezoning to building subdivisions, these strategies produce superior investment performance in contrast to renting and flipping property. As an ignored opportunity by most individual investors, profits are secured for institutional investment firms and accredited investors who can wield the challenges of large capital requirements and elevated inherent risks.

Devolve Developer will alleviate the risks and barriers of real estate development and open the gateway to these high yielding opportunities. With the use of blockchain technology, the market will experience increased participation from individuals that will multiply global capital flow and fundamentally expand cross border income. Now individuals from all over the world can access the high returns of this investment environment.

The Next Generation of
Global Real Estate

The need for a divergent real estate business model is preeminent. Devolve Developer’s digitized platform will be disruptive and leading edge, collapsing the challenges of conventional norms.

The high cost of intermediation slows down the transaction process, delays closings and  reduces profitability for buyers, sellers and investors

Finding an interested party who satisfies the criteria  to assign/sell your investment, whether procedural or financial is arduous

Blockchain technology provide digital automation to intermediation and reduces costs, enhances services, and creates a higher return for you

A digital platform backed by tangible assets with the propensity for high profit margins and the independence to manage risk makes it attractive to all investors.

The Devolve Platform is the first high quality platform backed by hard assets engaging in large real estate development projects suitable for both institutional and individual investors. With the use of smart contracts, Devolve Platform will automate real estate development projects by connecting participants with projects on a distributed platform that would otherwise not be accessible.

The Devolve Platform assesses viable development project opportunities and grants access to everyday investors to participate. Acquired development projects undergo a rigorous evaluation process to determine the eligibility for the program. Participants can search and compare approved projects and allocate tokens to their selected projects to automatically earn rewards.

Smart contracts will determine and manage the distribution of rewards based on the performance of development projects and the allocation the DVX token to participating token holders.

DVX tokens rewarded from development projects can be:

Devolve token (DVX) is the native token on the Devolve Platform and will be used for participating in development project opportunities and future platform programs. The blockchain and smart contract technologies will increase the utility of the Devolve token to include additional services and functionalities such as shopping among our merchant providers, property registration, property valuation and real estate transaction management.

Explore the new era of real estate development on the blockchain

Build your portfolio with an exceptional rewards model and hedge against the highly volatile cryptocurrency market. Grow your portfolio exponentially creating a maximum token value.

Avitesh Shrivastava, son of late singer-composer Aadesh Shrivastava and famous actress Vijayta Pandit, is the newest rising star on the Bollywood scene inheriting both of his parents’ talents. With a distinguished musical background, Avitesh spent many years composing music with his late father, working with acclaimed composers in Bollywood films such as Baabul and Baghban, and composing the title track of Amitabh Bachchan’s talk show Aaj Ki Raat Hai Zindagi.

Launching his singing career in an international music video with two-time Grammy Award winner, Giorgio Tuinfort, Avitesh possesses a music portfolio consisting of popular songs such as, One for the World with his father and Akon, Angel of Peace and Aao Hum Tum Milkar. More recently, Avitesh is making his Bollywood acting debut by working on the latest film by renowned director Remo D’Souza.

Take a look at why so many different celebrities from around the world choose to be a part of Devolve.